Mothers anonymous: how children’s books have written mum out of the story

By Michaela Mahlberg and Anna Cermakova

Here’s an interesting fact for Mothering Sunday. When it comes to children’s books, the word “mother” is the most frequent noun used to refer to female characters – and has been since the 19th century. But despite this, mothers are rarely the heroes or protagonists in children’s fiction – often, they don’t even have a name. They are part of the supporting cast – and sometimes they are even dead or otherwise absent. When it comes to what their children are reading, mums are usually barely visible.

We’ve been studying gender in children’s literature by analysing the frequency of words like “mother” in collections from Beatrix Potter to modern children’s books. We compared 19th century children’s books with contemporary children’s fiction which has helped us understand how repeated language patterns reflect a gendered view of society.

What is striking in both the 19th century and contemporary data, is the inequality of gender representations. When we looked at word pairs such as “he” and “she”, or “man” and “woman” the scale of the imbalance becomes clear – in the 19th-century data “he” is more than twice as frequent as “she”, while in the contemporary fiction, “he” is still 1.8 times more frequent than “she”. Meanwhile “man” appears in the 19th-century collection 4.5 times more frequently than “woman” and in the contemporary data it is 2.8 times more common. 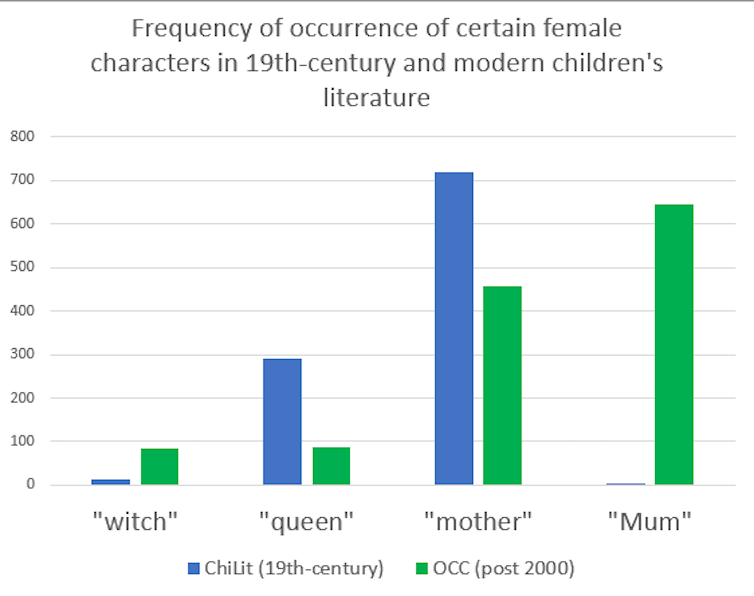 A comparison of the frequency of mentions of different types of women in 19th-century and modern children’s books.  Michaela Mahlberg/Anna Cermakova, University of Birmingham, Author provided

The range of occupations for men and women is also particularly revealing. In the 19th-century data set, as you’d expect, occupations and roles for women in society were extremely limited. Women could be queens, princesses, nurses, maids, nannies or governesses – but there were not many other options.

While there may be fewer nurses, maids, nannies and governesses in the contemporary data, we still find queens and princesses. But even now, the wide range of occupations that is theoretically open to women – doctor, driver, servant, professor, officer, spy, boss, judge, farmer, pilot, scientist, minister to name just some of the frequent ones – is mostly occupied by men in children’s books.

It’s yet another example of what writer and activist Caroline Criado Perez describes as the “gender data gap”, when she uncovers the invisible bias in a world designed for men. So fiction and the real world look pretty similar.

A comparison of the frequency of mentions of different types of women in 19th-century and modern children’s books. Michaela Mahlberg/Anna Cermakova, University of Birmingham, Author provided

Against the background of the otherwise skewed gender representation, this makes mothers even more prominent. Mothers do not only occur frequently, they are also found across a large number of texts. Mothers feature in most of the children’s books that we studied. A comparison with other typical female characters in children’s books – witch and queen – also highlights the importance of mothers.

But the story is not often actually about the mothers. They are defined by being somebody’s mother: “Martha’s mother sent me a skipping-rope. I skip and run,” wrote Frances Hodgson Burnett in her 1911 classic, The Secret Garden.

The role of mothers is primarily to look after their children. “I got nine GCSEs and am well-known for my literacy skills enforced by Mum,” wrote 16-year-old Rachel Riley in her diary in Joanna Nadin’s 2009 novel, Back to Life.

Sometimes their rules cause anger or frustration in the child protagonists. “Request denied by Mum on ‘because I say so’ grounds,” Rachel reports in My Double Life (2009), another book in the same series. But mothers are always there to support their children as 14-year-old Maya’s Mum demonstrates in Tim Bowler’s 2011 psychological thriller Buried Thunder after Maya makes a horrific discovery.

And, as you might expect, they are often the person for their children to confide in as Jade admits in Julia Clarke’s 2009 novel Between You and Me. “Normally I tell Mum what is happening in my life. But I can’t tell her about Jack and the failed kiss or the shock of seeing him and Sybil together.”

Mothers might not typically be the main character in the story, but their presence matters. In Rhiannon Lassiter’s Bad Blood (2007) John’s mother has died and his father has remarried. But she is a constant presence in the back of his mind. “He remembered his mother’s smell, like apples and soap; the way she’d hug him goodnight, wrapping her arms around him so that they were locked together in the hug. They were small memories but they were all his.”

So, while mothers might often only appear in the background, without them the story would certainly not be complete. In reality, of course, mothers play numerous, varied and important roles in the narratives of their children’s lives. And they are of course, not only mums. Something to remember this Mothering Sunday.