It’s also possible you may have a group of Facebook friends who are all mutual strangers, where nobody is friends with anybody else in the group; let’s call such a group an “anti-clique.”

This exercise might seem frivolous, but there’s an underlying structure here that serves as an effective illustration of certain advanced mathematics. I use examples like these in the classroom to engage undergraduates in mathematical reasoning without detailed computations.

Let’s return to the problem of finding a clique or anti-clique. Consider a girl called Alice who is spending time with five people. Among these five, Alice must see either more friends or more strangers.

Left: Alice sees three friends and two strangers; Center: If any pair of Alice’s friends are also friends, then they form a clique with Alice; Right: If none of Alice’s friends knows each other, the three form an anti-clique.  Jonathan Hulgan, CC BY-SA

The same situation would work if you assumed Alice saw more strangers than friends.

This argument is a relatively simple result from the area of pure mathematics known as graph theory.

In mathematics, graphs sometimes refer to the graphical representation of functions, such as lines, parabolas and other curves. Graph theory studies something different. It focuses on the properties of mathematical structures that abstractly model relationships between objects. The objects can be represented by points, called vertices; related objects would have their corresponding vertices connected by a line called an edge.

In the Facebook example, a graph theorist would consider a graph whose vertices represent the collection of friends. An edge would connect each pair of individuals who were Facebook friends with each other.

Precisely speaking, when a graph is defined by a relation on some collection of objects, as is the case here, it is called a “network.” So Facebook truly describes a “social network.”

Most students I encounter have never studied graph theory; it’s rare for it to appear in high school or a lower-level math course.

This is unfortunate, as I feel that graph theory provides a perfect setting for practicing mathematical arguments without requiring tedious calculations – just as in the example with Alice and her Facebook friends. 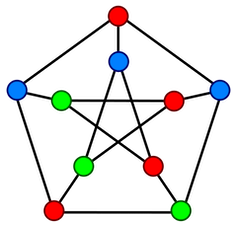 What’s more, graph theory lends itself nicely to the development of questions of real mathematical substance. My simple demonstration of the presence of a three-person clique or anti-clique in any group of six people can motivate further questions from the curious observer: When can you guarantee a four-person clique or anti-clique? If three relationships are possible between individuals – for instance, friends, strangers and acquaintances – when would you be guaranteed to see a three-person clique, anti-clique or “pseudo-clique” of mere acquaintances?

These and similar questions were answered in 1955 by mathematicians Robert Greenwood and Andrew Gleason. The mathematical contributions of Greenwood and Gleason are profound and numerous. However, no mathematical expertise is required to develop such questions, nor is it needed to enjoy the pursuit of a complete solution.

The traveling salesman problem comes up in graph theory.