Cape Town - The number of the novel coronavirus disease (Covid-19) cases has passed 100 in the Sub-Saharan African region, where more than 20 countries have reported cases and taken measures to fight the virulent disease, including South Africa, Nigeria and Ethiopia.

Among Sub-Saharan African countries, South Africa has seen the sharpest rise in the number of cases. The country reported its first case on March 5 and as of Monday, 62 confirmed cases of Covid-19 had been confirmed.

Also on Monday, Benin, Tanzania and Somalia confirmed first cases of Covid-19. Benin's Ministry of Health said in a statement that the patient is a 49-year-old male of Burkinabe nationality, who entered Benin on March 12. A volunteer gives out hand sanitizers in front of the medical office at the Cheikh Anta Diop University of Dakar in Dakar, Senegal, on March 16, 2020. Photo by Eddy Peters/Xinhua

Tanzanian health authorities on Monday said the patient was a female who arrived in the country from Belgium by RwandAir on Sunday.

Somalia's government on Monday announced the suspension of all international flights for 15 days starting on Wednesday as the country confirmed the first case.

Most of the cases in the region involve people arriving from Europe and North America.

The cases reported recently in South Africa are distributed in the Gauteng, Kwazulu-Natal, Limpopo, Mpumalanga and the Western Cape provinces, according to the National Institute of Communicable Diseases (NICD).

All these patients have a history of travels to European countries, the United States, Canada, India, or the United Arab Emirates, the NICD said.

Of the 62 cases, there are two cases of local transmission, who are under investigation, the institute said.

The NICD said it is in the process of conducting confirmation tests and following up on possible contacts that the patients may have come into contact with. 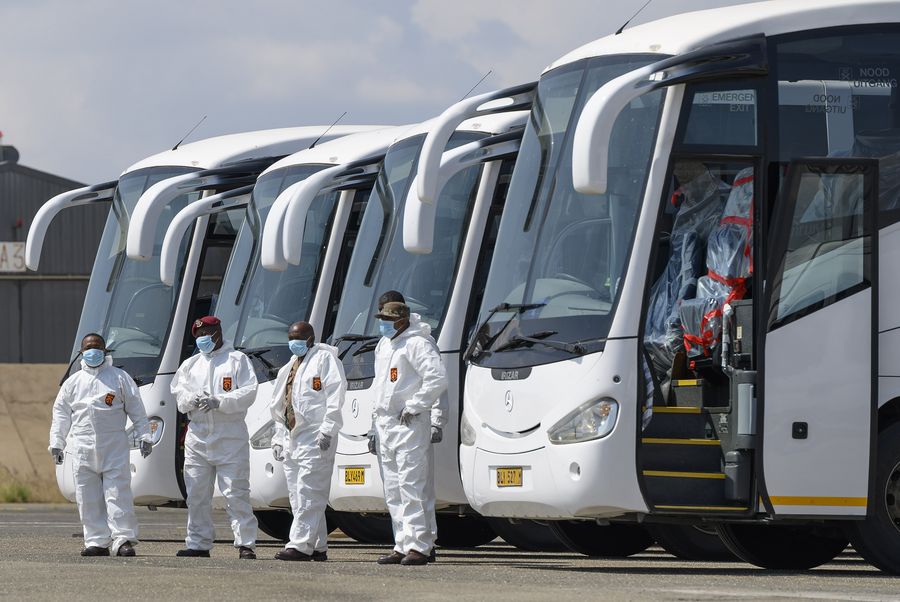 Since the commencement of the outbreak, the country has conducted about 2,400 tests.

The NICD said it continues to enhance outbreak response activities to contain Covid-19 in the country.

As most of the confirmed cases are imported by people who had traveled to Europe and North America, the country has imposed a travel ban on countries seriously affected by Covid-19.

From March 18, travelers from high risk countries will not be allowed, President Cyril Ramaphosa said on Sunday evening as he declared a National State of Disaster.

Ramaphosa also announced a raft of emergency measures in place, which include school closure, prohibition of gatherings of more than 100 people, mandatory testing, self-isolation or quarantine for South African nationals returning from affected countries.

The government is also strengthening surveillance, screening and testing at ports of entry into South Africa.

On Monday, the Department of Tourism announced that it will be suspending Africa Travel Indaba, which was scheduled to take place on May 12 to 14 in Durban.

The International Jazz Festival and Cape Town Carnival, both scheduled for later this month, have also been canceled.

Ramaphosa said his cabinet is in the process of finalizing a comprehensive package of interventions to mitigate the expected impact of Covid-19. 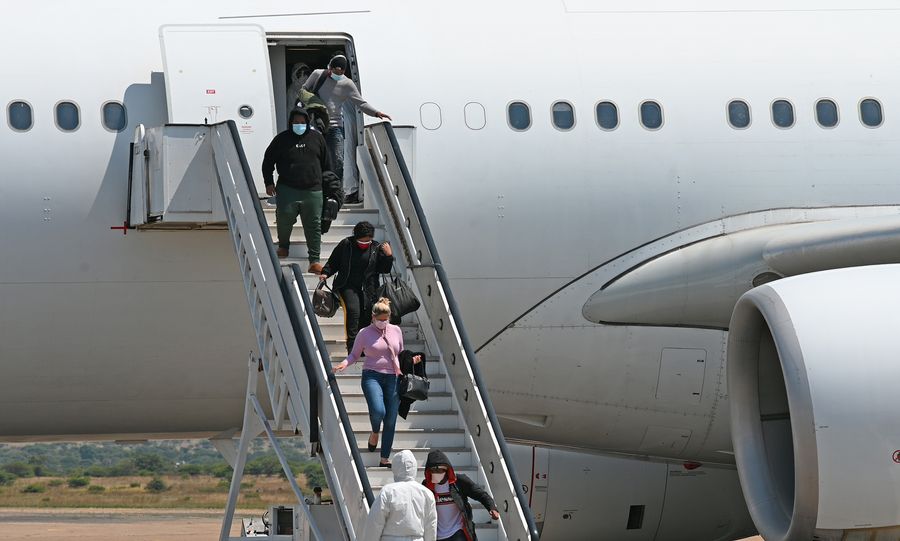 Passengers wearing face masks get off a plane at an airport in Polokwane, South Africa, on March 14, 2020. Photo by Molefi Moleli/Xinhua

Ramaphosa said he will be chairing a National Command Council to coordinate all aspects of the national response.

ALL COUNTRIES MUST ACT

"With Covid-19 officially declared a pandemic, all countries in Africa must act," said Matshidiso Moeti, The World Health Organization (WHO) Regional Director for Africa.

As of March 12, 62 WHO experts in technical areas including coordination, treatment, infection prevention and control, community engagement and surveillance have been deployed across 18 countries, and more deployments are planned.

Those experts who have arrived in countries with confirmed cases are now assisting national governments in their response, helping them to manage the disease and prevent onward transmission, according to WHO.

Sakoba Keita, Director General of the Health Security Agency of Guinea, said countries in the region need to exchange information and control strategies, so that there is coordination among countries. 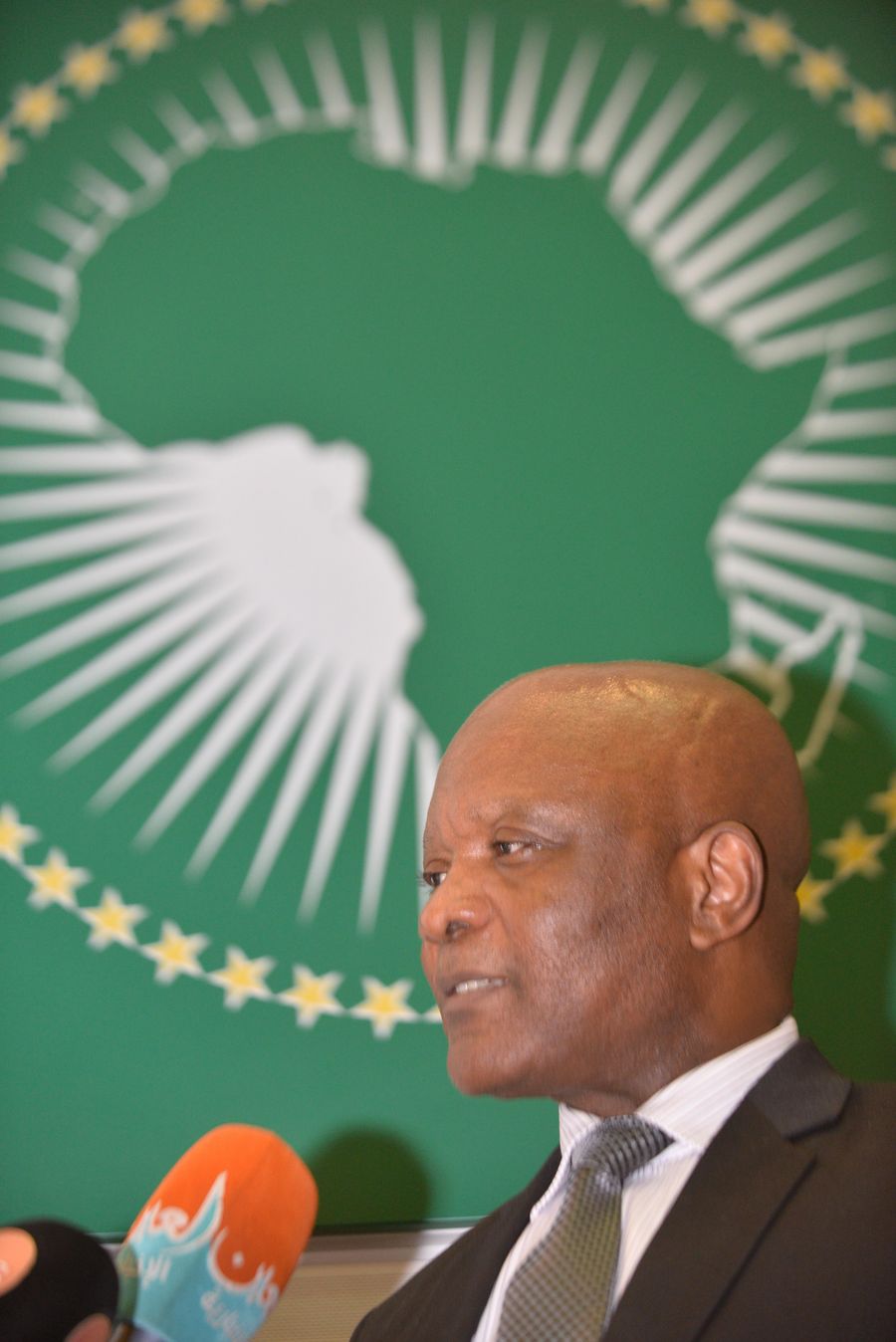 Director of the Africa Centers for Disease Control and Prevention (Africa CDC) John Nkengasong speaks to the press at Africa Union (AU) headquarters in Addis Ababa, capital of Ethiopia. Photo by Michael Tewelde/Xinhua

Keita called for the countries in the region to take energetic measures in the direction of limiting travel by citizens of affected countries to the continent.

"In terms of funding response actions, we know that African countries have few resources. But greater political will is needed so that national budgets can take care of this matter very quickly."

"We have a senior technical advisor from China CDC who is working closely with us. He has been participating actively as far as the Africa Taskforce on Coronavirus is concerned, providing the necessary advice," he said.