Want to work for government? Better behave on social media

Using social media to spew hate may come to haunt you in the future when looking for a government job.

This is because the Department of Public Service may look at job seekers' online patforms which include social media accounts as part of background checks.

According to a letter dated January 31 2019 and sent by the Director General Professor Richard Levin to all heads of national and provincial departments as well as all government components, Minster Ayanda Dlodlo issued a directive on suitability checks which has been in effect from February last year. 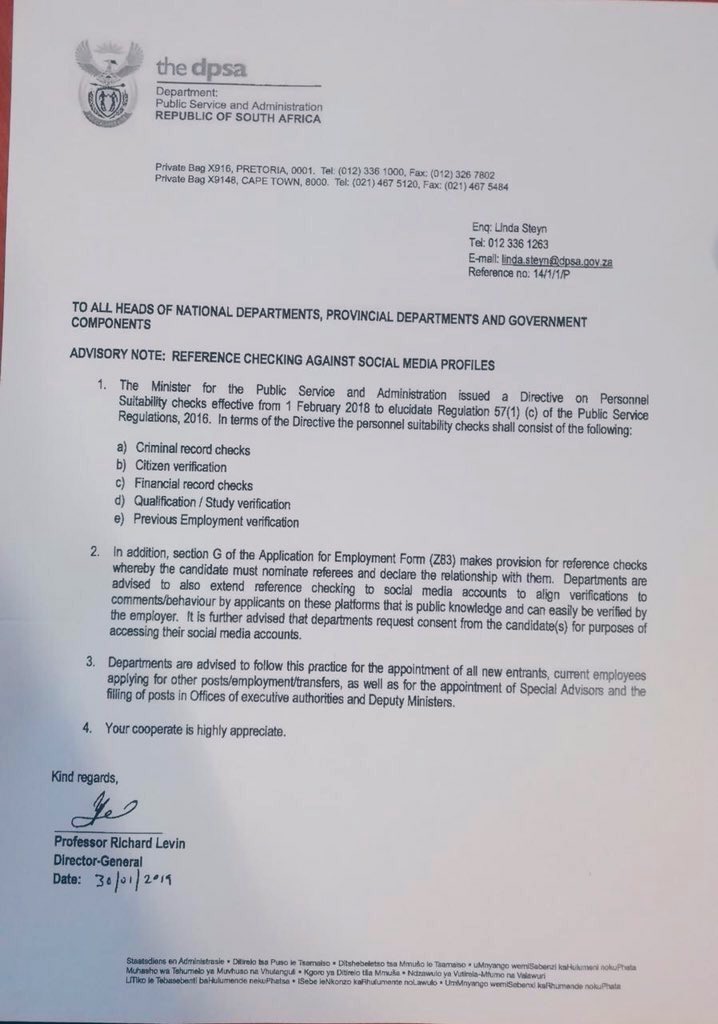 The letter from the Department of Public Service and Administration stating how background checks will be done from now on.

However, the applicant's social media behaviour will also be placed under scrutiny.

"Departments are advised to also extend references checking to social media accounts to align verification to comments/behaviour by applicants on these platform that is public knowledge and can easily be verified by the employer.

"It is further advised that departments request consent from the candidates for purposes of accessing their social media accounts.

"Departments are advised to follow this practise of the appointment of new entrants, current employees applying for other posts/employment transfers as well as for the appointments of Special Advisors and the filing of posts in the offices of Executive Authorities and Deputy Directors."

The Star spoke to DPSA spokesperson Mava Scott who confirmed that the letter was indeed authentic and from their department. He stated that it was important to check applicants' online platforms as people were now living in a digital age.

Scott said it was not a directive but rather an advisory letter. However, he was also quick to point out that they were not out on a witchhunt of prospective employees on social media.

"This means that you may go to the person's online platforms if you want to broaden your search; it's not compulsory.

"We need to get consent first and if the person does not want to give consent that will not affect their chances of getting the job. We can't prejudice you on the basis of information we don't know. Whatever you give us we will take," Scott said.

Some people on Twitter have, however, claimed that looking at people's social media posts would be unfair and a way of not employing those that are critical to the government.

Social Media checks is to exclude people who are critical of government. Political affiliation comes to play here. This will result to unfair discrimination.

They already exclude us based on where we stay, where we went to school, which companies were previously worked for and based on your surname. Now they have another excuse for excluding us. Discrimination by another name.