OPINION: Strap in for a rough ride from the ratings agencies

JOHANNESBURG - Fitch and Standard & Poors likely to follow in Moody’s footsteps when they finally downgrade South Africa to speculative status.

The outlook for South Africa to avert a cut in its credit rating to speculative grade or junk by Moody’s is grim.

To get a firm indication of the financial position of State-owned Enterprises (SOEs) overall I have combined the financial results and statements of financial positions (balance sheets) of five of the largest SOEs, namely Eskom, Transnet, Central Energy Fund (CEF), PRASA and SAA. Some could argue that the sample is not truly representative of the SOEs in total. Yes, I agree that some such as the Public Investment Corporation and SA Reserve Bank are in much stronger positions than other SOEs but the sample encompasses the bulk of the total SOE assets. Due to the lack of financials for SAA I assumed that the SAA’s financials for 2018 and 2019 remain the same as in 2017. 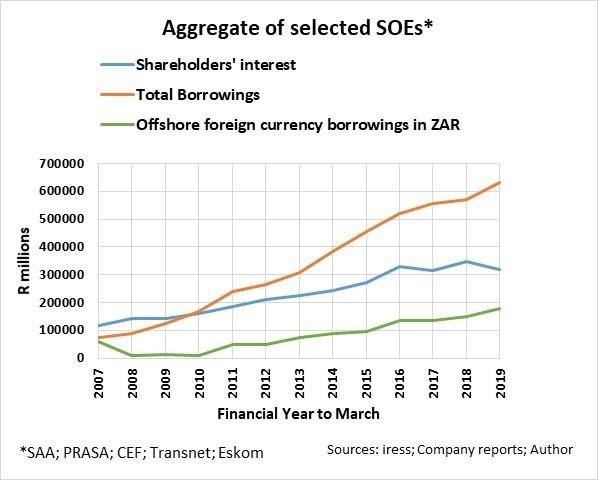 Despite capital injections by the South African government into PRASA, SAA and Eskom shareholders’ interest remained flat since 2016 at around 300 billion rands. 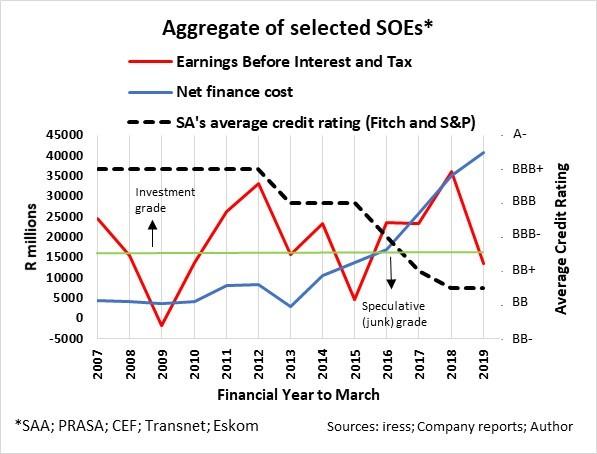 After reaching a low in 2015 the PBIT of the SOEs surged until 2018 but it hardly matched the surge in finance costs of the SOEs resulting in virtually zero profits before tax. The credit rating agencies were unimpressed and South Africa was cut to speculative or junk grade in 2017 while 2018 saw another cut.

The credit rating agencies were lenient last year despite a significant drop in the SOEs’ PBIT which saw the gap between net finance cost of the SOEs opening up to more than 26 billion rands, mainly as a result of Eskom’s PBIT falling to a loss of nearly 2 billion rands from 20 billion in 2018. The outlook for Eskom in the current 2019/2020 financial year does not look good either. At this stage my calculations indicate Eskom’s PBIT to come in at 11 billion rands while total finance costs could amount to 40 billion rands – that is assuming that the SA government will fund shortfalls with a 50/50 combination of debt and equity and a positive result for Eskom in the utility’s case against Nersa.

Transnet managed to evade the debt death cross in 2014 and the gap between the SOE’s PBIT and net finance costs is in an upward trend. The Central Energy Fund is on the mend after the write-offs in Ghana and elsewhere.

The decision by the ruling party and government to keep SAA going will add to downside pressure on South Africa’s credit rating as significant funding on top of what is waiting on the Eskom front will put the fiscus under huge pressure.

Fasten the seatbelts and hold on tight – the odds are stacked against us. I will not be surprised if Fitch and Standard & Poors will follow in Moody’s footsteps when they finally downgrade South Africa to speculative status.

Ryk de Klerk is an analyst-at-large. Contact [email protected] His views expressed above are his own. You should consult your broker and/or investment advisor for advice.